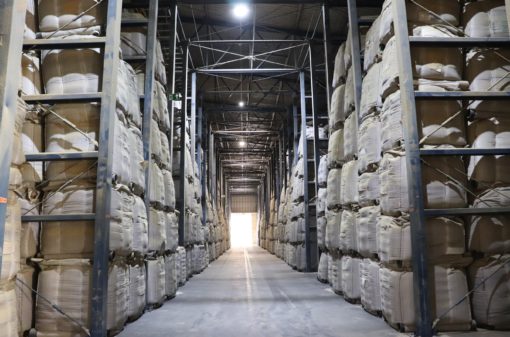 The cooperative was founded in 1932 as a credit cooperative, and in 1957 it became Cooxupé.

Since then, the cooperative actions have been aimed at the development of coffee growers. Currently, Cooxupé is composed by 17 thousand members. Its action area encompasses South, Matas, and Cerrado in Minas Gerais, and Média Mogiana in São Paulo State. Surely, the coooperative is remarkably relevant to coffee farming in those areas.

Due to their performance, the cooperative with its members are given important awards and acknowledgement. Some of numerous prizes and honors are: top ESG rank at Exame Magazine, golden prize at SomosCoop Excellence in Management, largest agricultural co-op according to OCEMG (Organization of the Cooperatives of Minas Gerais); amidst many others.

Another fact that shows the strength of Cooxupé as a co-op is its participation in Brazilian production of Arabica coffee. In 2021 the amount of coffee produced by the cooperative represented 18% of national production, and 26% of Minas Gerais – Brazil’s greatest producing State – according to CONAB (National Company of Supply).

The cooperative was founded in 1932, by 24 rural producers, as an Agricultural Credit Co-op: Cooperativa Agrícola de Guaxupé. The name ‘Cooxupé’ would come some years later.

Yet in November 27, 1957, under the leadership of Isaac Ribeiro Ferreira Leite, it became Cooperativa Regional de Cafeicultores em Guaxupé. Therefore, it started its trajectory in coffee with the activities of reception, dry-milling, and commercialization of coffee. Thus, that was the beginning of a new era for the co-op. Cooxupé has been progressively seeking innovation, technologies, and pioneerism. So it has been developing along the years, and standing as a reference in coffee farming to Brazil and to the world.

Back in 1959 the co-op made its first export. Since then, Cooxupé has advanced overseas by shipping millions of bags of green coffee to more than 50 countries, in 5 continents. Thus, that is the current scenario for Cooxupé, which concentrates 80% of its activities in exporting coffee produced by its members.

In the words of Osvaldo bachiçao Filho, Cooxupé’s Vice-President Director: “Cooperative movement is the core of Cooxupé. There is cooperativism in all that we do. Exportation is a clear example of how it happens.”

He also states that “family farming is the reality, for 97% of the members are mini and small holders. In other words, such majority united – which also count for 70% of our inbound coffee – finds in cooperativism an opportunity for their coffees to reach out the world. In addition, they have more effective and active participation in good moments of the coffee market. Should those producers not be part of a co-op, they would likely face many more troubles to access the market”.

In this context, Cooxupé has also been leader in coffee exports in Brazil for years along, as stated by CECAFÉ – Brazilian Council of Coffee Exporters.

The natural and semi-washed coffees are produced by members’ families from more than 300 municipalities at Cooxupé’s action area. Namely, such areas are nationally recognized for the production of fine cup coffees, which are remarked in international preference in coffee market.

In addition, Cooxupé’s structure is constituted of 48 business units, an export office in Santos, the facilities of Japy – industrial and warehousing complex. There are also other dry-mill facilities and warehouses strategically placed within its action area.  Currently, the cooperative is ready to prepare 23 thousand bags per day, and it has storage capacity for more than 6 million bags.

The structure includes a REDEX (Special Place for Exports and Custom Clearance), which brings agility and safety to shipment of coffee.

Furthermore, Cooxupé has 3 centers of distribution of inputs in order to supply its members with the products they need, at the right time, and in safe conditions.

Cooxupé only produces Arabica coffee. That type of coffee plant has come from Ethiopia. Henceforth, it have been cultivated in many countries worldwide. Arabica coffee is known to produce finer and more exquisite beverage. The name “Arabica” is likely from Arabic traders who first spread the beverage internationally.

Entering the market of specialty coffees has also been considered a meaningful opportunity in Cooxupé’s history. In spite of being very competitive, the segment enhances producer’s profitability. In this direction, more than 10 years ago Cooxupé has launched SMC – Specialty Coffees. The company, totally owned by the cooperative, works exclusively in that market. The company offers members’ coffees to important clients overseas. Since 2014, SMC has exported more than 700 thousand bags of specialty coffees.

In addition to projects, prizes and certification programs that add value to coffee producers, Cooxupé has its own Roastery facility, which has been experiencing progressive growth in domestic retail market. Located in Guaxupé, the Roastery produces coffees that reach consumers in the States of Minas Gerais, São Paulo, Rio de Janeiro and Santa Catarina. By these means, Cooxupé is always attentive to opportunities that add value to the production of coffee growers, which represents the spirit of cooperativism.

All Cooxupé’s associated coffee growers rely on its services and intensive work, from planting to harvest. All the efforts aim at bringing sustainability to coffee growers, in and outside farms’ gates.

Some of the main services provided might be quoted: daily liquidity for commercialization of green coffee; safe warehousing; funding for ag inputs; fairs of agricultural machines and implements. In addition, trainings, lectures and curses are held in the field, and the cooperative also serves members with technical assistance, free from charges. For instance, there are more than 60 thousand assistances per year, either in field or at Cooxupé’s stores.

Management that benefits everyone

Another constant concern at Cooxupé is the social-environmental matter. The co-op is committed with its members to create stronger ties with finance, society, and environment. In the other hand, strategic and well-planned management is extremely important for the cooperative to meet its goals, bringing benefits to all people involved.

Cooxupé’s President Director, Carlos Augusto Rodrigues de melo says that the cooperative is currently very representative in the global coffee market. The co-op agrees with the concept of the Organization of Brazilian Cooperatives, for it states that being cooperative is about believing that nobody loses when everybody gains. In his words: “It concerns seeking personal benefits while contributing to overall results. We´re based in values of solidarity, responsibility, democracy and equality.”

Melo stresses the unique way by which cooperativism works. It includes the refund of surplus/profit to members, which denotes the consistency of the co-op movement.

“We do impact both our own and the world’s reality. In fact, we represent the voice of farmers’ families along with federal and state governments, by advocating for our class interests. Therefore, talking of Cooxupé is about 17 thousand coffee grower families. And those families united are moved by trust and by cooperativism. They change the reality of Brazilian coffee farming by conquering the international market with steadiness and credibility,” declares Melo.

“It is such a sustainable and tireless job, in and outside the farms. Timely, congratulations to Cooxupé and all its members. For 90 years they have been playing a key role in cooperativism”, concludes the President Director.

90 years of cooperativism marked by accomplishments, commitment, and responsibility.